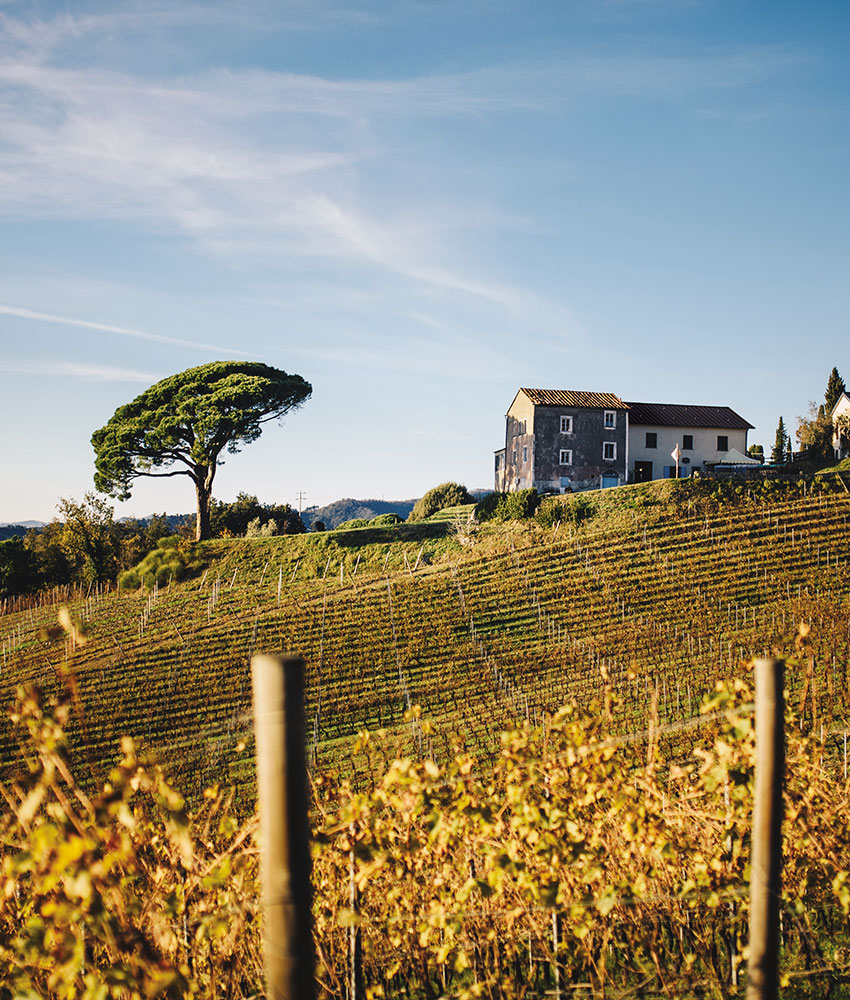 In the Colli di Luni area, the Fosdinovo hill is perhaps the most interesting because of the complexity of its soils. This area extends for 12 km from the famous Via Aurelia, at sea level, up to the historic Malaspina Castle situated about 550m above sea level. The soils of this area originated from the compression of the Ligurian sands against the Tuscan clays with the Apuan Alps in the middle, which are made of pure calcium carbonate. To better understand which location would allow the best vine-soil combination to truly express our “terroir”, the geology and geomorphology of three zones were studied: the foothill, the hillside and the hilltop.

The first surveys on the lignite of Caniparola date back to the 1800s. Upon investigation, it was found that the top layer of this anthracite soil was characterised by an alluvial conglomerate arranged in horizontal layers and a sandstone rich in carbon. A layer of clay separates the latter from a horizon rich in marine and terrestrial plant fossils. These soils impart to the two main planted varieties, Vermentino Bianco and Vermentino Nero, the great finesse typical of the gravel and the strong body of the clay.

This area is the warmest and most structured due to its slope, the full South-West exposure and the clay-schistose soils. In some areas, the soil’s pH reaches 8.6 which is considered the upper limit for cultivating grapevines. This area is excellent for our Massaretta and Merla wines, which need high thermal indices to develop their volume, together with great day/night temperature differences to allow not only great sugar accumulation but also high acidity, suitable for long ageing.

On the hilltop, at about 400 meters above sea level, in a 5-hectare natural amphitheatre we own a little “Garden of Eden”. Over the millennia, a small watercourse called “Fosso di Corsano” has carved out the mountain into two symmetrical spaces with soils of sandstone and different types of limestone that are called “Flysch”. These soils, with a small component of iron oxides and a pH of 4.9 create the perfect environment for the cultivation of Vermentino. In this “natural terrace” the sunlight and constant breeze allow our Vermentino to ripen in late October. All these characteristics impart to the Vermentino grown here its longevity, acidity and elegance; these wines could keep evolving and build complexity for over a decade.

Man formed the agricultural landscape of the Cinque Terre National Park over the last  thousand years in a heroic effort that has shaped the coast into terraces to accommodate vines and other crops. The original forests have been replaced by small terraces created by digging up rocks which were then used to build the dry stonewalls so typical of this area. The Terenzuola vineyards in the Cinque Terre extend for 1.5 hectares, at three altitudes that allow us to produce grapes of different profiles. The vineyards closest to the sea, in the Corniglia area, give us wines of great structure; those of the middle altitude, in Volastra in the Municipality of Riomaggiore, produce the best aromatics while those at high altitude, near the “Telegrafo” of Riomaggiore, give us that important acidic component.

Rather than training our vines on traditional pergolas, we have chosen to use the “alberello”, a bush vine system historically adopted in the hottest and most inaccessible areas along the Mediterranean sea. By using alberello we can utilise the little land available to its full potential, thus ensuring that each vine receives just the right amount of space and light.

Lastly, our planting densities are very high, up to 11,000 vines per hectare. Each vine is tied to an acacia stake with natural fiber to avoid introducing plastic or metal into this protected, unique and extremely fragile environment. 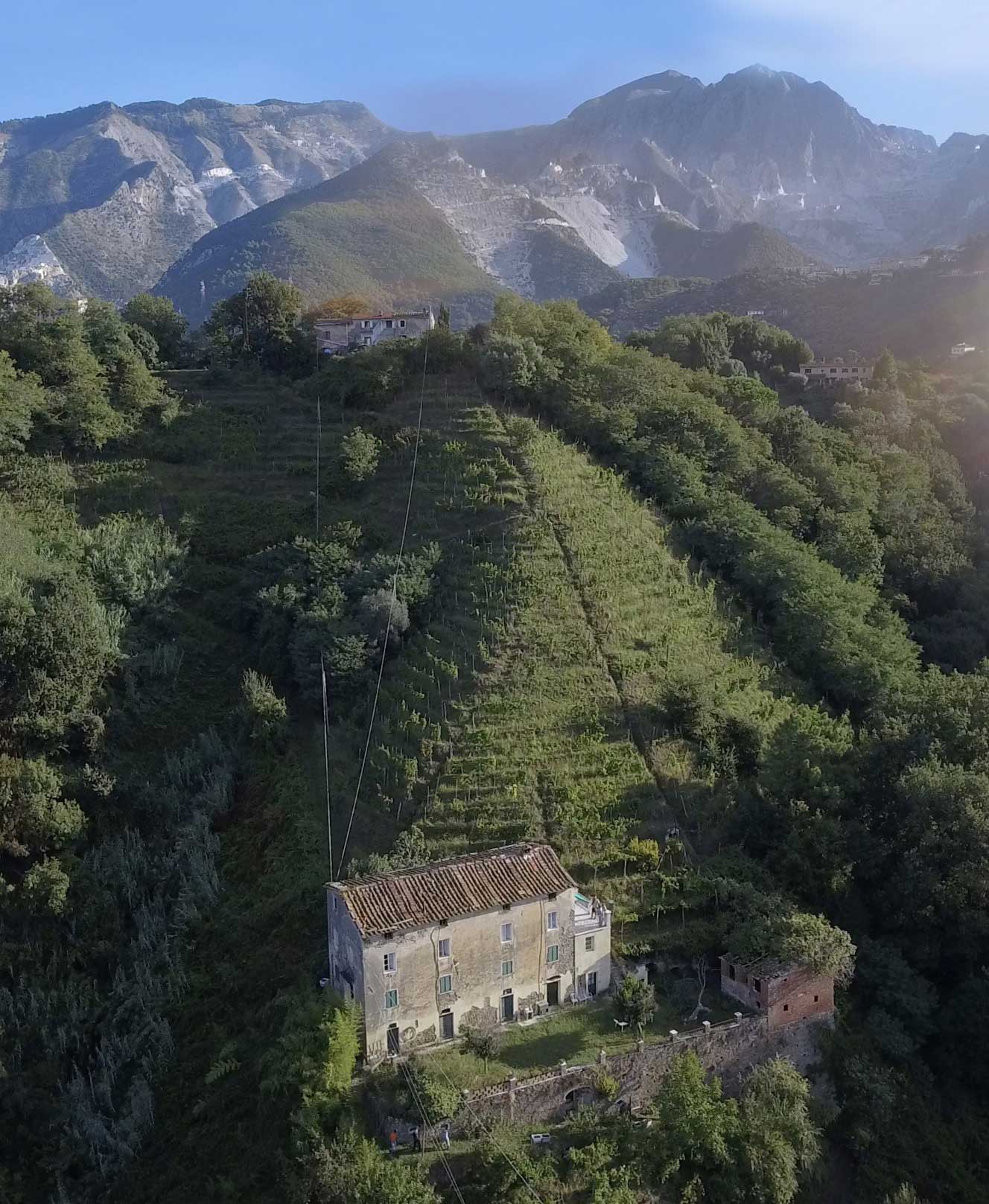 The history of viticulture in Candia, at the foot of the Apuan Alps, dates back to the foundation of the ancient Roman city of Luni (177 BC). It is back then that the first excavations of the famous white Carrara marble started, together with the construction of narrow terraces between the Alps and the sea that were used to cultivate vines. It is said that some Greek settlers planted different grape varieties on these terraces and the quality was so great that they named the area Candia, in honour of the port city in Crete, famous for its trade of fine wines. Over the centuries, the area of Candia has continued to cultivate the same vines, preserving this vast biodiversity (about 250 native varieties), despite phylloxera. The white varieties cultivated here are the aromatic Vermentino, Moscatello, white and yellow Moscato, Malvasia and Malvasia di Candia, the more acidic Verdusco, Verdarello and Verdicchio; tannic grapes such as yellow and pink Trebbiano, Grego, Durello and Bracciola. Among the red cultivars, we find Vermentino Nero, Canaiolo of all types, Massaretta or Barsaglina, Varano, Foscara, black Malvasia and red flesh varieties of various origins. In light of all this, the protection of such an exceptional environment is a priority for those who produce and love wine.